I’m not going to take my own photographs, both because I put my Cardboard together rather poorly and also because photographs don’t communicate much when we’re talking about 3D virtual reality.

The “device” (if you can call it that) looks like this:

The way Cardboard works is that it holds your phone steady and aligned in front of two specially calibrated magnifying lenses– one for each eye. When you hold your eyes up to the lenses, each eye only sees its respective half of the screen, and your brain is able to combine the two slightly different images into a coherent 3D image, just as it does in normal vision.

The potential educational value of 3D virtual reality is probably self-evident to readers of this blog, but to give one quick example, VR enables things like virtual field trips to faraway cities (Athens, Rome, Beijing, etc) or to natural wonders. VR games and simulations could also have educational merit in the right context, such as virtual operations in medical school.

My impressions of Cardboard, though, are slightly negative. Fundamentally, Google Cardboard is a very simple, cheekily-named toy designed to force your phone to be something it was never, ever meant to be: a 3D virtual reality visor. The fact that it works at all- however poor the final experience is- is incredible.

First of all, I got an ultra-cheap knockoff from a Chinese vendor which, at the time of writing, costs $2.99 shipped. The kit was confusing and didn’t quite have all the correct parts, but it did include the lenses, and I was able to fold the cardboard kit up securely enough to use it. For what I paid for it, it was worth every penny. However, I’m sure one of the more expensive kits out there would have given a better experience.

When I tried the popular Tuscan Drive demo, I was surprised at how terrible the graphics looked. Thanks to the magnifying lenses, everything had a “soupy” or distorted quality, and individual subpixels were highly visible. (Have you ever sat so closely to a TV that you could see the individual pinhead-sized red, blue, and green dots that make up the screen? That’s what I’m talking about.) In fact, the graphics were poor enough that although I was indeed seeing things in 3D, the “wow-factor” of the 3D graphics was overwhelmed by the “meh-factor” of how subpar the image was. Maybe the distance between the lenses and the screen wasn’t perfect or something, but there’s nothing I can alter in the calibration of the lens setup.

Plus, the headtracking that can be managed using cellphone-grade accelerometers just isn’t that great. On my Galaxy S3, there was noticeable lag between my real-life head movements and the corresponding in-game head movements, and the field of view often rattled oddly up and down or side to side based on messy data from the accelerometer.

I’m still excited by the technology, though, and rough as the experience is, I’m very glad to have gotten my own Cardboard to play with. Once the Oculus Rift is released, I’ll be sorely tempted to snap one up. If nothing else, the first mass-market VR goggles since the Virtual Boy will have some kitch value in the future, if not necessarily collector’s value.

As someone who teaches a lot of speaking classes, I need to record a lot of spoken feedback for my students, especially with regard to pronunciation. Until now, I’ve always used low-quality headset mics, but I’ve decided to invest in a better microphone. I settled on the Samson Go Mic because of its excellent reviews, its tiny size and portability, and its moderate price.

I (haphazardly) clipped it to the arm of a camera tripod, positioned it near my mouth, set it to a cardioid recording pattern with a -10 dB pad, and gave it a shot: 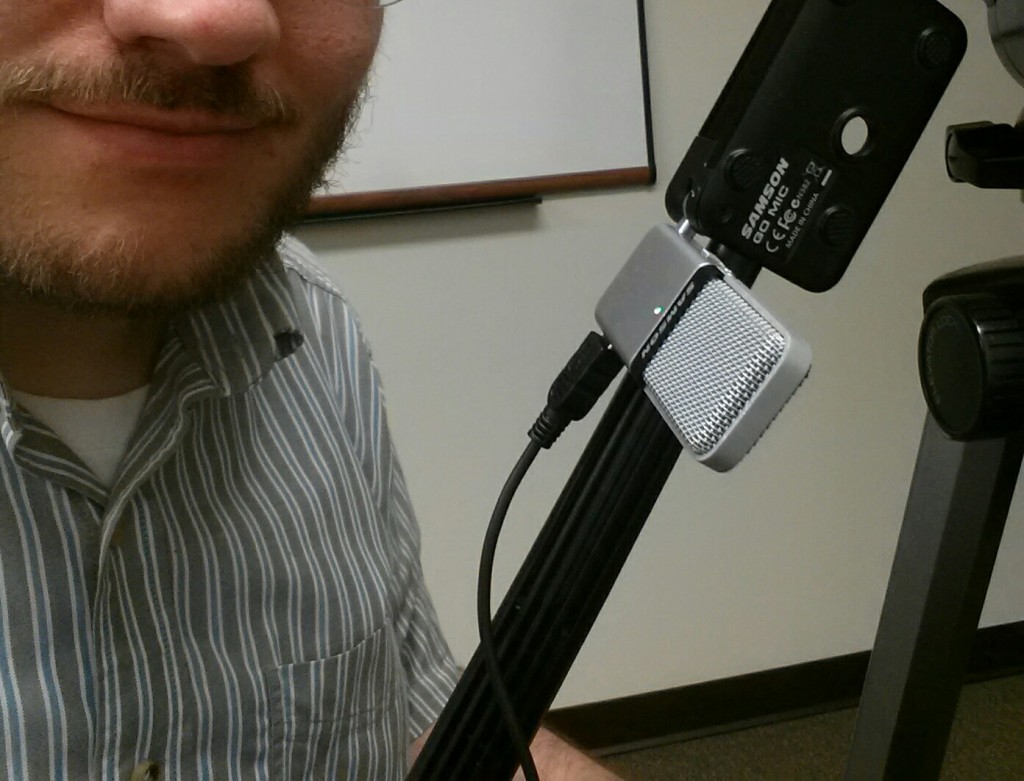 I did a little bit of noise reduction in Audacity, but it barely needed it.

This isn’t exactly a studio-quality setup, but considering I spent thirty-something bucks instead of several hundred, I’m very happy! This is a huge improvement over the level of quality I used to record at.

I’ve also ordered a pop filter and a dedicated desktop microphone stand, so the camera tripod should get to resume its normal duties soon enough! 🙂

I love Android, but it’s so darn finicky.

To be fair, most of the issues I run into can be blamed on the fact that I like to modify devices and run custom software on them, but I only take it so far. I only run major, stable releases of CyanogenMod, which is the most popular community-supported distribution of Android. And my phone model (Galaxy S3) is one of the most popular Android devices of all time, so that helps to guarantee an above-average level of software support and performance.

Above average isn’t perfect, though!

After running an update recently, I realized that my Bluetooth headphones’ “Play/Pause” button was now only being interpreted as a “Play” button, meaning I couldn’t pause anything. After a bit of research, I found instructions on what to change in a specific system configuration file (/system/usr/keylayout/AVRCP.kl) to fix how the system handles Bluetooth input. Of course, if the phone weren’t rooted, I’d have been out of luck entirely.

On top of that, I realized today that whenever LTE service is available, the phone simply cannot connect to the network anymore. It tries to, but it just hangs indefinitely. I had to force it into no-LTE, CDMA-only mode to at least get a 3G connection in the meantime. I’ll have to flash a new modem on the phone to see if that clears up the issue.

Update: It turns out the LTE problem was carrier-specific. Flashing a custom APN XML file cleared up the issue.

My Nexus 7 repair didn’t work, but I have the feeling that the tablet was already water damaged beyond hope. It’s possible that a new battery might revive it, but I’m not confident enough in those odds to want to invest in the cost of a brand new battery. They’re quite pricey.

However, I did just successfully replace the battery of an iPhone 5! So that’s good. It was a multi-step process involving a fair bit of disassembly, but everything went according to plan. Getting the old battery out was quite difficult due to the strong adhesive bonding it to the shell of the phone, but after a few minutes of prying, I was able to peel it out.

In retrospect, I probably ought to have taken some photos of the process– but I was primarily focused on just getting the procedure right!

These are the items I picked up recently for working on small devices, including this iPhone repair:

(If you cannot see the equipment displayed above, you may be using an ad blocker that blocks Amazon images. Try disabling your ad blocker and reloading the page.)

The bit set is nice for its inclusion of a plastic spudger and pentalobe bits, but the Phillips-head bits don’t run small enough. I still have to use a glasses repair kit to deal with the smallest of screws.

For the second item– I didn’t know that magnetic project work surface mats existed, but now that I own one, I love it. The idea is that you place individual sets of screws/etc grouped together within the frames, then label what they are using a dry-erase marker. The weak magnetic surface keeps stuff from sliding or rolling away. I actually used to do the same thing using pieces of paper or (perhaps bizarrely) our stovetop, since the stove surface is pure white and works well with dry-erase markets.

The magnetic wand has been a lifesaver. It’s crucial for picking up (or finding, period!) the kinds of microscopically tiny screws used in smartphones and tablets.

The ESD wrist strap is kind of basic IT equipment, but I’d never bothered to buy one before.

And the head-mounted magnifier is something I’d originally picked up for soldering, but it occasionally has its uses in working on tiny devices, too.

(One more thing: it’s good to have a strong suction cup. I used one half of the Orbit smartphone mount set, since the ball provides a great, sturdy place to grip while prising a screen off, but can then act as a kickstand to keep the screen readily accessible and easy to grab.)

I would LOVE to get the iFixit Pro Tech Toolkit:

But I really can’t justify it, given how rarely I actually crack open the shell of a device! All that other equipment listed up above COMBINED only costs HALF of what one Pro Tech Toolkit costs. It’s a shame.