A discussion developed late in my “Academia and the MOOC” course about completion rates and “lurkers.” The term lurker has been used for quite awhile online. At first, they were people who went into discussions and chat rooms and just read/watched without participating. The term had a negative connotation.

The term carried over to online courses. Of course, in a class online with 25 students, anyone who does not participate is readily apparent. All the major LMS allow you to track student usage. In fact, it’s easier to monitor student participation online via the software than it is to monitor in a large face to face classroom.

In my own online courses, I will nudge lurkers. But in a MOOC with thousands of students, that may not be possible. I commented in my MOOC that at least 20% of registrants did not view any content. The LMS didn’t allow for me to get percentages for discussion participation for the class as a whole (only for individuals) but I could see that at least half of the other participants only participated in one of the four modules.
I suspected that some of those who used module one and then dropped out (or lurked) had decided the course was not for them. Now, I am having second thoughts about that.

As the discussion on this topic continued (and it has continued beyond the course in other places) and based on some 1:1 messages with participants, I realized that what I saw as lurking may be better described as auditing.

Module one was on the history of MOOCs and two participants told me that they were really only interested in reading that content. Although they may have looked at some of the other materials and posts, they entered the course to find out how MOOCs developed. They found what they wanted, and they left.

So, are they lurkers? I would say the term does not apply.

I had divided the second module into the roles of the stakeholders in academia that MOOCs affect – designer, teacher, administrator, support staff and student. I had contact with several people who told me that they were most interested in seeing what was posted about their role and participating in that discussion and less intersted in the other roles. I had hoped that people would enter all the discussions about the interrelated roles, but that may have been an unreasonable discussion on my part.

Again, someone who took the course to find out more about the instructional designer’s role in MOOCs may have looked at some history and looked at case studies from different colleges that touched on the designer role, but may nt have had the time or interest in the other sections.

It has been suggested that MOOCs might function more as a textbook online (content repository) that includes a way to engage with the author (teacher/designer) and with others who are interested in the topic. Since Canvas allows my course to remind online and accessible to the students who registered, it is possible for people to go in after the four week live run of the class and still read discussions (no posting allowed) that they didn’t get around to reading, and view the rest of the content.

So why not leave the course open for new registrations perpetually? Obviously, anyone jumping in now would be met with hundreds aof unread posts and no chance to post themselves and expect a response from the original poster who is likely to be done with the course. But there are MOOC providers experimenting with this idea and by having new start dates on a rolling basis, you could allow new groups of participants to use the material again and again with fresh discussions. Would it be necessary to have a facilitator in the course to keep things moving and revise the content? That is probably needed. My “course” was not typical in that it did not have assignments or grades, so anyone not posting in discussions was lurking/auditing. It wasn’t designed as a MOOCourse, but intended to be a MOOConversation, so not participating in the conversation would be, to me, a kind of failure. That may not be true for participants.

I came across a presentation on “Learning Theories for the Digital Age” by Steve Wheeler (see below) that contained these two slides. He suggests that lurking may be considered “legitimate peripheral participation.” 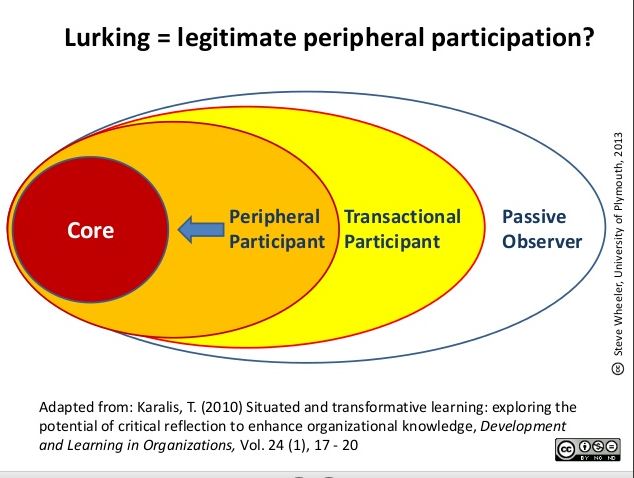 Where would we place the course auditor/lurker in his “architecture of participation?” 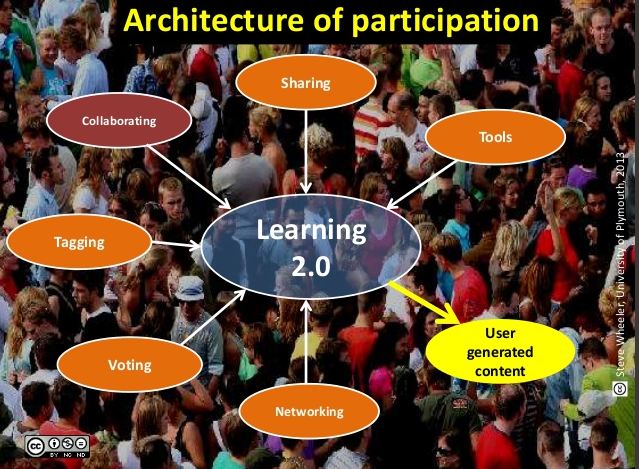 One of the participants in my course, Ann Priestly, has posted some thoughts on this topic on her own blog. She takes issue with my comment that “being engaged in any online course of any size means being involved in the discussions. It’s like web 1.0 and web 2.0 – read only and read/write.”

She is of the belief that there are many types of engagement including reading, reflecting and creating one’s own knowledge. She may be right. I am certainly coming from having taught for decades face to face and for more than ten years online in traditional credit bearing courses with always less than 25 students – and that just may not apply in the MOOC world.  I certainly have become “engaged” with books I am reading where there is no interaction between the content and myself or with other readers or the author. Was I lurking?

Ann included a link to another post on this issue of lurking that suggest these people might be called “listeners.” Still, as MOOCs become more accepted as legitimate courses for credit or advancement, the issue of what level of engagement will be required to complete a course successfully will become more important.

For now, my conclusion is that we need to rethink the reasons that people enroll in MOOCs and consider that lurkers have a legitimate reason for being there, and we might want to take that person into consideration in the course design.

I wish now that I had a required survey for students to register that included more information about what they wanted from the course and what their intention was in registering. (Typically, I see the question of how many hours do you plan to give to the course, which isn’t really a helpful number to me.) If 30% of registrants were there because of a particular content area or just to “experience a MOOC,” that would change your completion numbers from the start.

Learning Theories for the Digital Age from Steve Wheeler

Rethinking Lurkers in the MOOC Experience by Ken Ronkowitz is licensed under a Creative Commons Attribution-NonCommercial-ShareAlike 3.0 Unported License.

One thought on “Rethinking Lurkers in the MOOC Experience”