This guest post by Derrick Waddell was previously published in his blog, Teach the Cloud.

In December of 2011, onlinecolleges.net put together an infographic about the use of technology in colleges based on research from educause.edu, pewinternet.org, and computerworld.com.  The results are interesting and reaffirm many of my beliefs concerning educational technology.  Here are some of my main takeaways.

1. Students prefer blended courses. While secondary and post-secondary schools are seeing a big push toward online learning, only 11% of the college students surveyed prefer completely online courses.  Traditional courses didn’t fare much better, with only 15% preferring no online content.  The majority–58%–prefer classes that are a mix of the two.  Moving courses into an online environment where students create more than they consume, have access to countless resources, and can pace their own learning is absolutely a move in the right direction.  Without a practiced teacher there to guide the students, though, it’s like handing them the keys to the car without showing them how to drive it.  Online courses aren’t making the teacher irrelevant as some fear; they’re just changing the teacher’s role from a dispenser of knowledge to a guide on the path to knowledge. 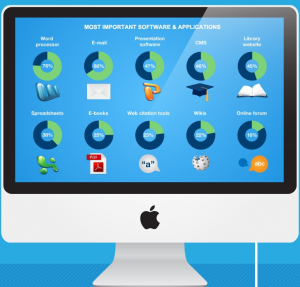 2. Old technology is not dead.  I wrote a blog post a while back about the death of email with the rise of social networking where I argued that email is not dead, just a different tool that meets a different need.  This survey seems to back up that argument.  Despite the rise of new tools, both online and off, some of the classics remain as relevant as ever.  The three “most important software and applications” listed in this survey are the word processor, email, and presentation software, respectively.  New tools are great, but we don’t have to throw out other useful tools just because they’re old.  We don’t forget fire because we have heat pumps, we don’t throw out the wheel because we invented wings, and we shouldn’t throw out email because we can communicate through social networks. Each is a tool that has its own purpose. 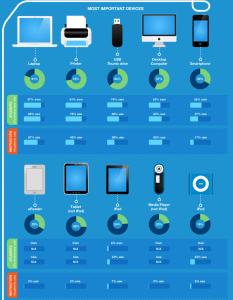 2b. We’re not living in a post-PC era (at least not yet).  Laptop and desktop computers still rank quite a bit higher in use than tablets and even smartphones with both students and instructors.  Again, back to the tools argument.  Tablets and smartphones are exceptional tools, but they are tools that perform specific functions.  These functions are not the same  as a laptop or a desktop computer.  They may be someday, but for now, desktops and laptops give more computing power, creation tools, and other functionality than tablets.  Why can’t tablets, smart phones, desktops, and laptops all be used in schools just for different purposes?  Why is the argument that tablets are computer replacements?  You wouldn’t throw out your hammer just because you got a really cool new screwdriver set, would you? 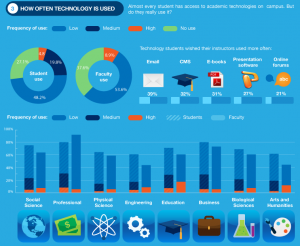 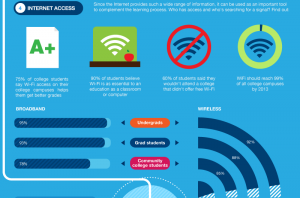 4. Internet access is monumentally important.  My favorite quote from the infographic is “90% of students believe that Wi-Fi is as essential to an education as a classroom or a computer.”  And they’re right.  The internet is the greatest collection of information that this world has ever seen.  Couple that wealth of information with the fact that all of it is accessible to anyone with an internet connection in moments, and the possibilities for knowledge and learning are exponentially greater now than at any other moment in history.  What we need to do is stop spending money on the static knowledge in school textbooks and reinvest that money in the dynamic knowledge we can find online.  It’s not enough, though, to offer free Wi-Fi on all school campuses.  In order for students to learn at their own paces, our country must work toward equality in internet access.  In my school system, a majority of students are still without broadband internet, relying instead on wireless, satellite, or even dial-up connections to access the web.  Until access to broadband internet is equitable, there will always be a child left behind.

There’s more to this excellent infographic that I didn’t go into, but you can find it at http://www.onlinecolleges.net/2011/12/20/technology-college-campus/.  Go over, take a look, and let me know what you think in the comments!

Touch and go by Derrick Waddell is licensed under a Creative Commons Attribution 3.0 Unported License.