I’ve been invited to speak on a panel on “Expanding the Teacher Toolbox” at Three Rivers TESOL 2013. I’ll be presenting my tips on how Quizlet.com can supercharge your teaching, something I’ve previously presented on at the English Language Institute. I’m excited to share what I’ve learned and done and to see what new ideas the audience brings up for discussion!

If you’re in the Pittsburgh area, check out the conference website here. The conference runs from 9 AM to 12 PM in the Mellon Board Room of Chatham University. Registration on site is only $5 for non-members!

A colleague of mine is looking to buy a tablet for largely professional purposes. The Kindle Fire HD, iPad Mini, and Nexus 7 have been jointly dominating the casual tablet market, but only recently has the iPad seen worthy challengers in the professional device market segment. Both the rapidly-maturing Android tablet ecosystem and the aggressive push by Microsoft to get its Surface Pro into the hands of college students and professionals have begun to gnaw on Apple’s lead. Here’s my colleague’s letter, which acknowledges the iPad’s dominant position but expresses a desire for alternative options:

Hi Bill!
As I alluded to earlier this week, I’m planning on purchasing a tablet soon and am curious to get your thoughts on the various options that exist. I’ve done a small amount of my own research, and have come to the conclusion that the best existing product is the ipad – I’m not a fan of Apple in general, so I’m wondering whether you’d agree with that assessment.

I’m planning to use the tablet primarily for 2-3 things: short-term replacement of my laptop for when I travel (such as my 3-week trip to Asia this summer), portable note-taking to “replace” or supplement my hand-written research notebook (so I can have searchable notes), and potentially as an e-reader. Ease of use, ability to use standard programs like Word (or similar, compatible alternatives), battery life, and ability to use/attach a real keyboard are probably the most important to me, given that I don’t know much about the products out there. Wifi is all I need for connectivity, as I don’t have a smart phone and have zero plans to begin paying for data on any device, much less a tablet. I’ve looked at the new Surface Pro, but the battery life reviews are terrible – I can’t justify spending that kind of money (almost as much as an ipad!) for something with only 4 hours of battery. Most other alternatives (Galaxy Note is another I looked at) seem good… but everyone seems to say “good but not as great as the ipad” for practically every category.

Given what I’ve said, what are your thoughts? Is the ipad really the best product, or is there another that I (neo-Luddite that I am) should be considering? For reference, anything $1000 or under is in my price range, so I’m not too worried about that. Thanks!

Given my colleague’s preferences—a non-Apple device with a long battery life and the ability to replace a laptop for professional purposes—I suggested an Android tablet, arguing that it can go toe-to-toe with an iPad for all practical purposes without being weighed down by Apple’s price tag.

It’s true that the iPad is the best overall product in terms of hardware quality, app selection, and accessories. It’s also one of the only tablets to have up to 64GB capacity. However, you definitely pay extra, and I’ve grown to really dislike the iOS operating system due to it being so restrictive. Those two things combined mean that I never plan to buy another iPad.

When I bought my iPad a year ago, it was literally the only product on the market which was both an excellent tablet and an excellent e-reader. Most tablets of the earlier era were okay for web browsing and watching videos, but the pixel density was low enough that reading anything long-form was an eye-straining chore. The 3rd-generation iPad, which I bought on launch day, was the only tablet to have a screen good enough for heavy reading.

There’s a $399 version (16 GB) and a $499 version (32 GB). It’s much cheaper than the iPad, but it has similar specifications, including an excellent screen and a high-performing battery. There are other large-size Android tablets on the market (see this page for more) but I think the Nexus 10 has the best price/performance balance.

In terms of connectivity, it has WiFi, a headphones jack, bluetooth (for keyboards, headphones, and other accessories), micro-HDMI (for video output/presentations), micro USB (for file transfers and charging), and a special docking-pin connector for extra-fast charging. It’s also a popular model of tablet, so I’m sure there are a lot of accessories for it (covers, etc.)

A year ago, the selection of apps specifically optimized for Android tablets was a total joke, but it’s really bloomed since then. I don’t have an Android tablet myself, so I can’t speak from experience, but I’ve heard it’s getting as good as the iPad’s selection. To give one example, my favorite “work-related” iPad app- iAnnotate– just launched its Android version. The iPad dominated the tablet market for awhile, but developers are taking Android tablets much more seriously now.

If the iPad is off the table, what’s the best alternative tablet for professional purposes? Is Android, stigmatized as a backwater when it comes to tablet apps, ready to step up to the plate with tablets like the Nexus 10 and the Galaxy Note? Is Microsoft’s Surface Pro’s flexibility worth its short battery life? What do you think? 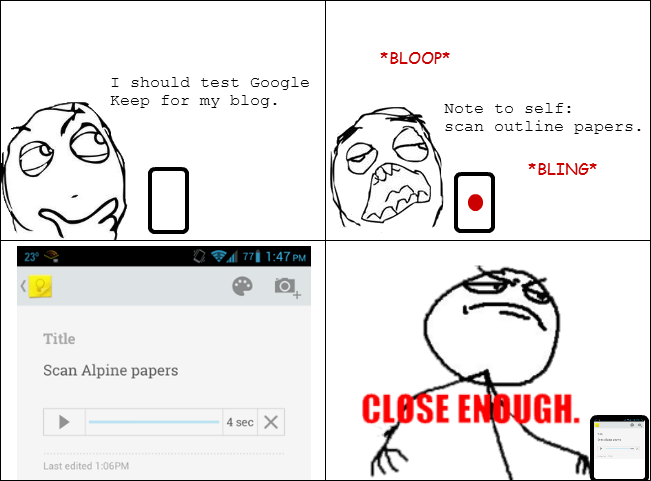 This guest post by Steve Wheeler was previously published in his blog, Learning with ‘e’s.

Since the introduction of the iPad and the subsequent parade of similar touch screen tablets, there has been much speculation about exactly what impact the devices might have on learning and teaching. A lot has been written about the potential of the devices, and much has been purely anecdotal. Clearly tablets are easy to use and have potential to revolutionise the way people access information. But what about formal education? I have contributed to the dialogue on my blog and there is much to discuss in relation to pedagogy, teacher roles, assessment and curriculum issues. There are also huge potential benefits in untethering learning – allowing students to roam while using the devices as mobile learning platforms. Recently a book was published with the title iPads in Schools, and several conference papers and articles are emerging which debate the place of touch tablets in formal education. Will they be a welcome addition to formal learning, or will they be a distraction? The intuitive design of touch screen tablets and their usability serve to fuel the hyperbole. But what impact are iPads really having on learning in formal education?

Until very recently, little empirical evidence had emerged to demonstrate clear learning benefits from tablets. The publication by NAACE (authored by Jan Webb) will add to our knowledge. Entitled ‘The iPad as a Tool for Education‘ the report is one of the most comprehensive yet on the impact of tablets in schools. It is a case study conducted at Longfield Academy in Kent, one of the first schools in the UK to adopt a school wide roll out of iPads to all of its students. Results of the study were mainly positive, showing that iPads were instrumental in encouraging better collaboration and increasing the motivation for learning. The tablets were used to develop beyond school activities and for supporting homework, and the quality of student work and learning outcomes has improved. This will be the first of a range of studies that will emerge in the next year or two, as more school adopt one iPad per child strategies, and time is taken to realise tangible and measurable outcomes from embedding the tools into daily learning and teaching.

Touch and go by Steve Wheeler is licensed under a Creative Commons Attribution 3.0 Unported License.